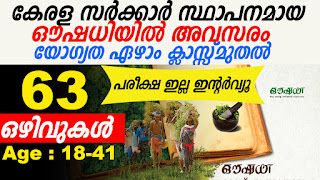 The largest producer of Ayurveda medicines in the public sector in India. One among the few public sector companies, consistently making a profit and paying a dividend to the government of Kerala. Supplies medicines to dispensaries under the ISM Department of state and these medicines reach lakhs of patients free of cost.
A GMP and ISO 9001: 2015 Certified company.
Produces 498 Ayurveda formulations –both classical and proprietary. Sole supplier of medicines to Government Ayurveda Hospital and Dispensaries in Kerala. Supplier of Ayurveda Medicines to Government Hospitals and Dispensaries of 19 other states, like Madhya Pradesh, Andhra Pradesh, Karnataka, Himachal Pradesh, Punjab, Chhattisgarh, Sikkim, etc. Caters to the need of the public through a vast network over 650 dealers spread all over the nation. Reimbursement facility available for Central Govt.& State Govt. employees on purchase of Oushadhi Medicines. Equipped with AYUSH accredited laboratory facility

Vacancy Details – Notification for the post of Shift Operator and Apprentice At Oushadhi Pathanapuram Subcentre, Kollam 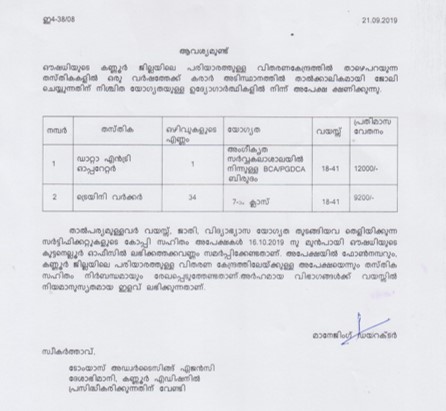 2 thoughts on “Oushadhi Recruitment 2019 – Walk In Interview For Data entry Operator, Trainee Worker and other posts”